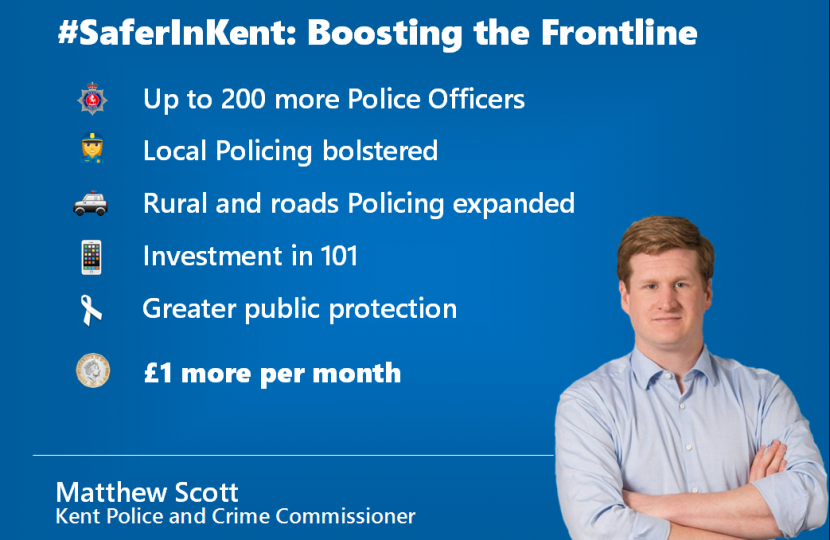 Today I am announcing my draft funding proposals for Kent Police for 2018/19.

Over the past year, I have continued touring the county and speaking with local residents, community groups, businesses and charities to seek their views on Policing in Kent and Medway. I have spent time with the Police Officers, staff and volunteers serving on the frontline to hear their experiences too.

There is no doubt that Policing remains under pressure. There are ever-increasing numbers of calls to respond to, many of which are more complex and a growing number of which are not criminal in nature – such as support for vulnerable people in mental health crisis. All of this comes whilst Britain’s threat level for international terrorism is severe.

Despite all of this, Kent Police has been among the top-rated Forces in the country in independent inspections for efficiency, effectiveness and legitimacy in 2016 and 2017. They have been deemed “Good” or “Outstanding” in every assessment, bar one. Police Officer numbers have risen since I was elected and PCSO numbers have also been protected. Antisocial behaviour is down 11%. There is a new cyber-crime team and the Volunteer Police Cadets programme is back. I'm investing more in services for victims of crime and together we have fixed the firearms licensing backlog.

The Government has listened to the views of Police and Crime Commissioners (PCCs) and increased funding for counter terrorism by £50m and will be investing a further £130m in other national Policing schemes. In order to support local Policing, the Home Office has allowed PCCs to increase the council tax precept by £1 a month for an average household, which could raise up to £270m nationally. Together, this represents slightly more than the amount PCCs said we needed next year.

Taking into consideration the views of residents, community groups, businesses, and the operational needs of Policing in Kent, I am pleased to be proposing the biggest Kent Police recruitment drive for a considerable time.

In laying out my proposal I am empowering the Chief Constable to recruit up to 200 additional Police Officers in the next year. These will go into boosting a number of areas, including rural and roads policing, local communities, fighting cyber-crime and providing greater public protection, and will take the total number of Police Officers in Kent to its highest level since 2012.

In addition to this, I have listened to residents’ views about crime reporting, and so there will be a boost in the number of call handlers answering 999 and 101 calls, so that people can get help quicker and more information can be provided to the Police. This will be alongside the new online reporting service, which is available for certain issues for those who wish to use it. There will be over 80 new police staff roles that will cover this, as well as other areas of Policing.

This will be funded in four ways:

•    I am asking residents to contribute the equivalent of an additional £1 per month from an average household towards the cost of Policing in Kent. This is not a request I am making lightly but is something I believe is necessary to keep Kent safe.
•    I have reviewed Kent Police’s proposals for over £9m of cost savings and believe that, as they will have a minimal impact on the frontline, they should be delivered. There should be no excuse for using extra council tax to prop up inefficient practices and where better value for money can be delivered, it should be. This will help mitigate the pressures of pay and inflation.
•    I am cutting the cost of my own office by £200,000 and re-investing this money in the frontline. I already provide extra money from my budget for Kent Police projects, such as the Volunteer Police Cadets and mental health workers in the Force Control Room.
•    I am authorising the use of a further £5m of Kent Police’s reserves over three years, should it be required, to support the recruitment drive.

There will also be other opportunities to increase Police Officer numbers and improve services further. The Police Transformation Fund, worth £175m, has been made available by the Government for new projects that reform the way that Forces operate and I will encourage more bids to access some of this money. I will also continue to drive collaboration with police colleagues and other agencies to make best use of property and improve delivery.

This is an ambitious proposal. It will mean that residents get something back for the tax that they pay and value for money in what is spent in their name. It boosts Policing in Kent in urban and rural areas in the fight against antisocial behaviour, organised crime, fraud and cyber-crime, domestic abuse and road traffic offences. Victims will get a better service when they have been subject to heinous acts and more criminals will be brought to justice.

I hope that you will support this vital boost. Please email your thoughts to haveyoursay@pcc.kent.pnn.police.uk by 27 January. The proposed precept rise will then go to the Kent and Medway Police and Crime Panel for its approval on 8 February.