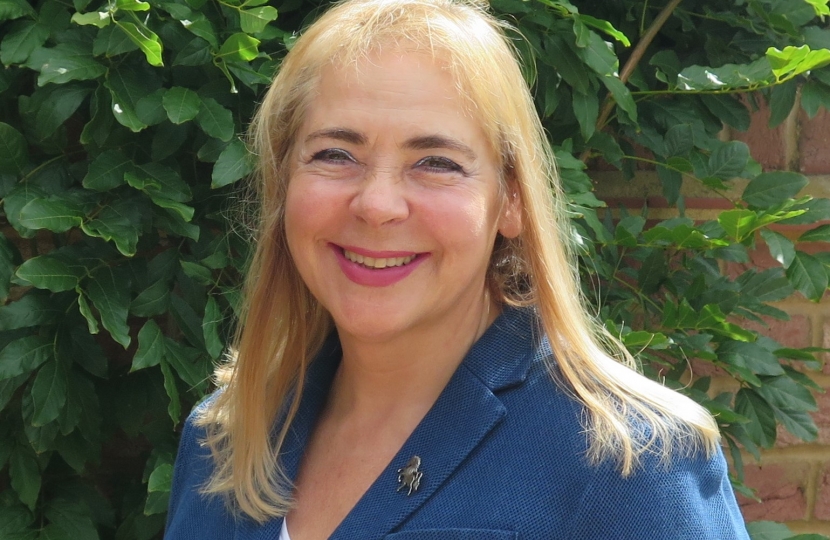 Susan Carey is the County Councillor for Elham Valley where she was first elected in 2005.

Susan says, “Elham Valley is one of the most beautiful parts of Kent and it’s a real privilege to represent the people who live here.”

Susan is Cabinet Member for Environment at Kent County Council and she’s leading the work to make KCC’s services and building carbon neutral by 2030. She’s also been working on reducing the amount of Kent’s waste that goes to landfill (now less than 1%!) and on delivering a commitment for 1.5 million trees to be planted in Kent.

Susan’s career was in international rail and she came to this area whilst working for Eurotunnel. She’s a Fellow of the Chartered Institute of Logistics and Transport and has an MBA with distinction from Ashridge Management College. She also has a Postgraduate Certificate in Local Government with distinction from London Southbank University.

Susan is a trustee of two local charities; the Sir John Williams charity which supports education in the Elham Parish and the Robert Thompson Charities which cares for the almshouses and village hall in Saltwood. Susan is also the honorary president of the National Coastwatch Institute in Folkestone, a friend of the Folkestone Choral Society and a friend of St Nicholas Church in Newington.

Susan’s husband, John Hall, works for the UK Border Agency and they live in Hythe. Susan and John are members of Saltwood church where they were married 15 years ago.

Conservatives hold Elham Valley with over half the votes cast